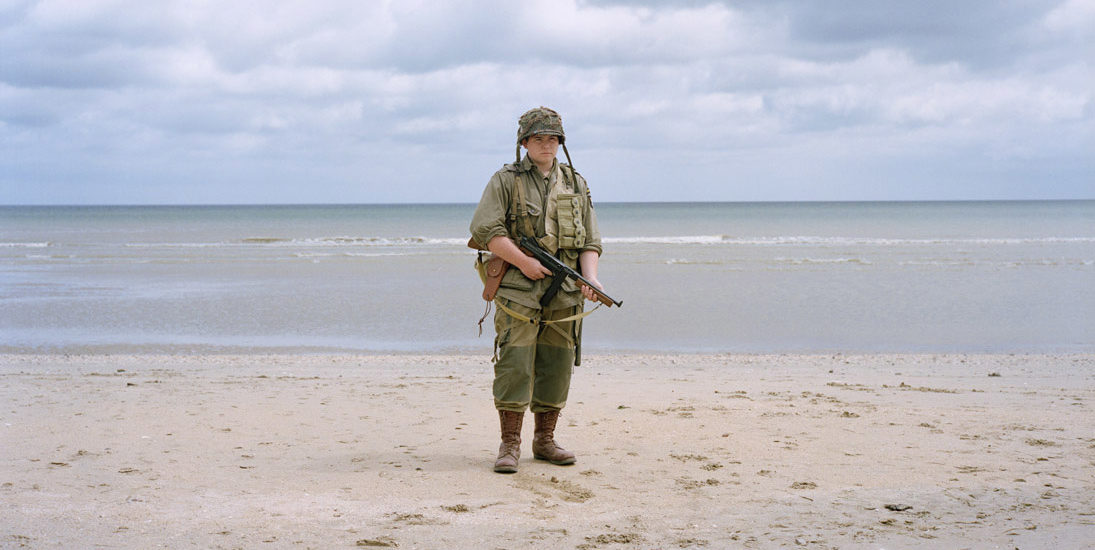 The role history plays in the construction of a European identity is a topic in no way abstract or academic. Several candidates from the past compete today in the construction of the narratives necessary to make sense of our present and future, and the way this happens affects our everyday life. One reason why I find the work of Roger Cremers very relevant in this context is that he makes aspects of such processes evident, and he does so without judgement through a mix full of honesty and unsettling irony. 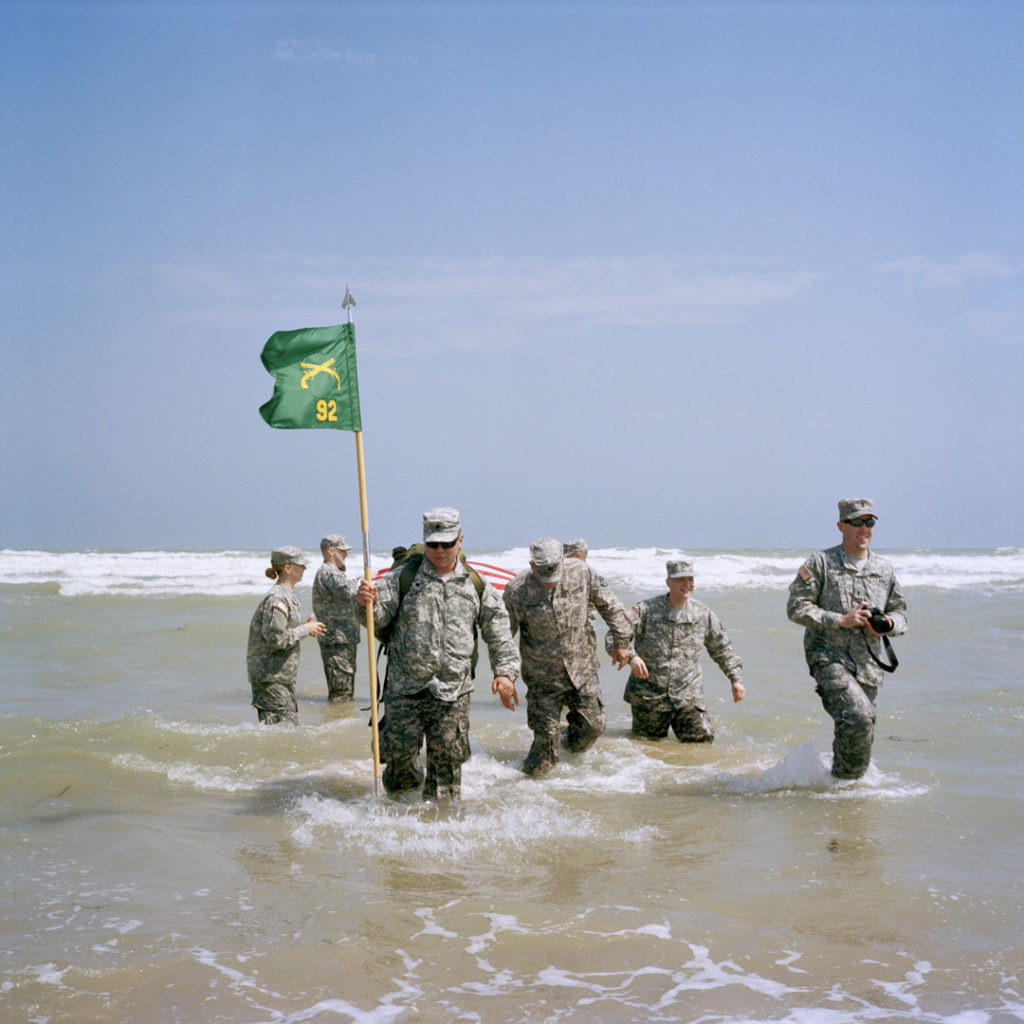 In 2008, Roger started a photographic project about the culture of remembrance and the ways in which this intermingles with modern day tourism; take for instance re-enactments of historical battles, which are turning out to be more and more popular nowadays. For this project, he visited historical sites in the Netherlands, France, Germany, Austria, Belgium, Great Britain, Poland, Russia and the Ukraine. Coming Thursday, April 21, his exhibition World War Two Today opens in the Resistance Museum in Amsterdam. On this occasion, I asked him a few questions.

When and why did you become interested in World War II?

We have to go back to when as a child, as many children, I used to ‘play war.’ That’s probably where my fascination with the war began. I didn’t have any family connection with it, but the area where I grew up was right on the border with Germany and there were many places remembering war around. Later on, when I became a photographer, I started to travel often to Poland and lived a few months in a town close to Auschwitz. On a visit to Auschwitz in 2002, I saw an American tourist in front of the gas chambers wearing a t-shirt with the words: ‘Laugh! That’s an order!’ That made me wonder. Has the Second World War become a tourist attraction? In the years that followed, I witnessed remembrance ceremonies and visited forgotten places, archaeological digs and monuments throughout Europe. There, I found that some want to remember, but many also go to have a day off, because they are on holiday and the tourist guide leads them there. It’s been 70 years and the way we relate to the war is changing. I can’t say that Second World War has become an attraction, but it definitely is part of popular culture. 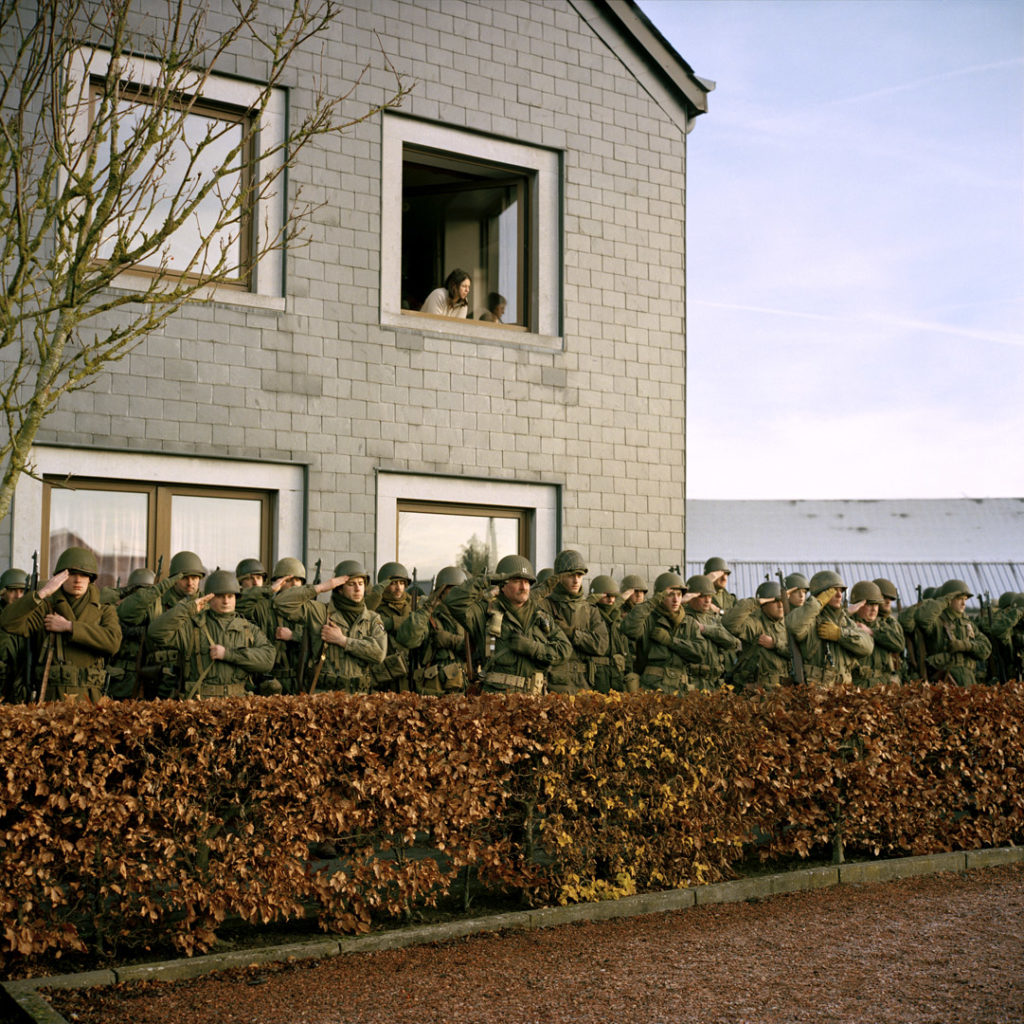 If I look at images from 70 years ago and the ones you produce today, I definitely notice a distance, but it is an unsettling one. What is the relation between them?

The number of people that have consciously experienced the war is getting smaller, and so are first-hand stories. The war has settled in our collective memory but commemoration changes, it has become more abstract and more personal at the same time. There is a parallel to this in the images. The images from the time of the war show the tragedy. They are the source of our memory, the evidence of the horror. The tragedy today stays on those images, while the experience becomes more and more abstract. My pictures don’t show the horror, despite the fact that I was in places where horror happened. I do some preliminary researches through archival materials, but what is interesting for me then is to see how archives appear and disappear in the landscape. I want to see it today, so I start my research to find where these traces are, what their purpose was, and then I go see what they are now. I have also visited places and events of commemoration and places where the war is ‘recreated’ and reenacted. I have shot scenes around monuments in the landscape and in places where people are literally walking on the remains of the war, in large and small manifestations. My pictures make them strange, somehow, sometimes through irony.

"I can’t say that Second World War has become an attraction, but it definitely is part of popular culture"

You research material traces of historical events, but you are not interested in those events as much as in what their traces ‘do’ today. What is happening to the material traces of the war? We know that some have been preserved and some have been deleted to fit certain narratives. Are they also being appropriated? Or, perhaps, you are not even interested in the ‘archaeological excavations,’ but more in the ‘diggers’…

On one hand, you can say that I focus on the sites rather than on the events that they witnessed and help us remember, but mostly in fact I do look at the people: from the serious to the less serious, from veterans to people who don’t even notice that there is history. One day I decided to focus solely on what I saw and became aware of the enormous amount of visitors each day and observed the way they behaved. There are professional archaeologists, who come from their universities, to find out what was going on in those places. In Poland I visited places where I could not go, where scientists were still trying to reconstruct historical facts. Around former Stalingrad there were also amateur archaeologists: in the middle of nowhere on the steppes of the Volgograd Oblast, the group was looking for the remains of soldiers who had died during the Battle of Stalingrad, so that they could be given an honorable burial. Some others were mostly trying to engage difficult kids, to keep them away from the street. Some even dig for money, to put history on eBay for collectors. There is serious scientific effort, but also fun, entertainment, along decent ways of commemoration. On a Saturday afternoon, there might be all of that: among people who are dressed up as soldiers, you’ll find both an educational aim, and plain fun. More and more people, from serious history study groups to sensation seekers, try to keep memories of the war alive through re-enactments. They come from all walks of life, from medical specialists to lorry drivers. Watching re-enactments can make one feel uneasy. Yet I have also seen those involved collecting money for veterans and caring for them. Re-enactors are increasingly part of “official” ceremonies of remembrance; the border between remembrance and experience is blurred. 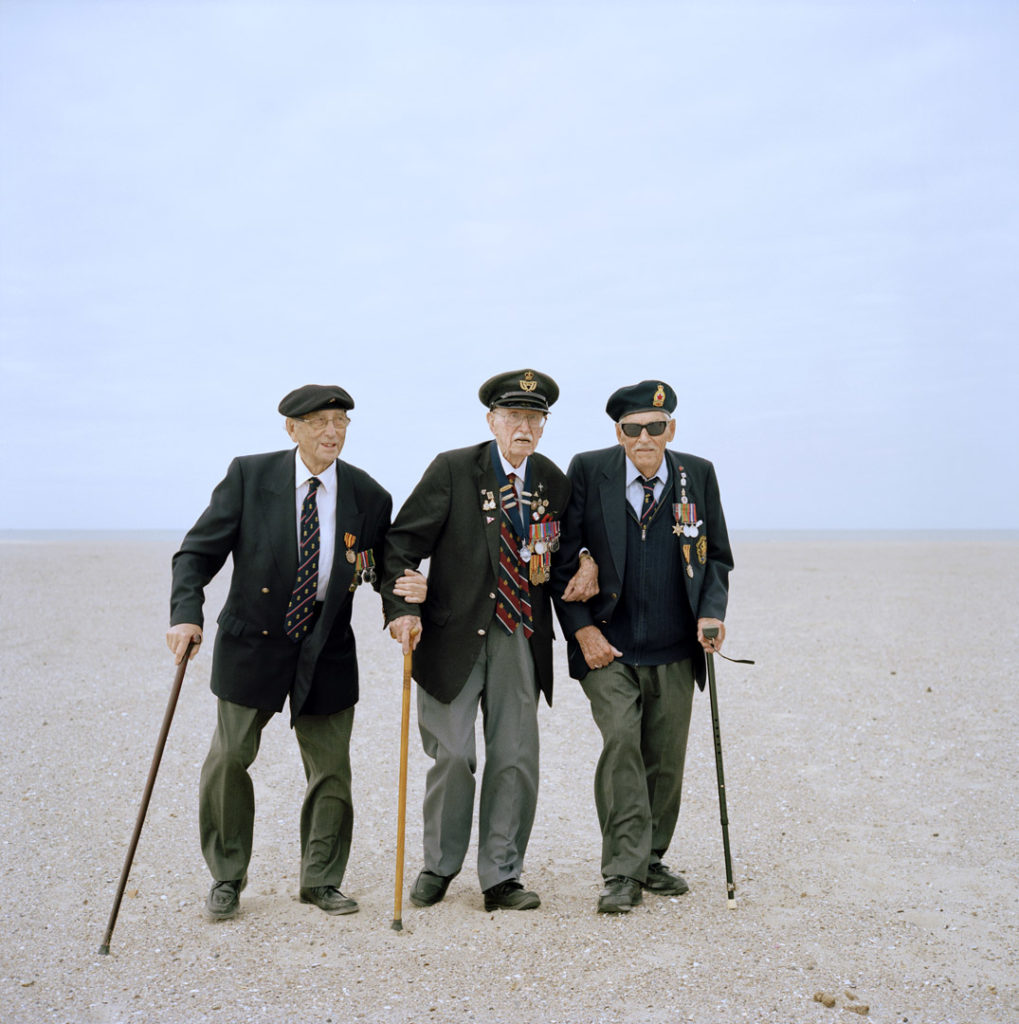 The European Union is a peace project, in that the very need for it was strongly felt only during or after the two great wars of the 20th century. In searching for a European identity, many believe that history can play a fundamental role. Memory, though, might be more important in developing a shared attachment to the European project. At the same time, we can argue that a shared memory does not exist. The history of Europe is a history of conflicts. For this project, for over eight years, you have visited half of Europe, from Belgium to Ukraine, Germany, England, Poland, France, and so on. Are there differences in the ways the war is remembered?

Yes, definitely. In England, for example, you see that for them, WWII was mostly a military operation, while here in the Netherlands the war is claimed by the Holocaust. WWII is the holocaust in the Netherlands, but in England that never happened, because they were never occupied. There is a picture in my book where you see that you can throw a ball at Hitler; you can show an image of Hitler at a fair over there, just for fun, and do something with it. It is unthinkable to do something like that in the Netherlands. In Eastern Europe also, there seems to be less problems with the representation of the Germans during WWII: you can go to the beach and have your picture taken while dressed up like them, in a photobooth. 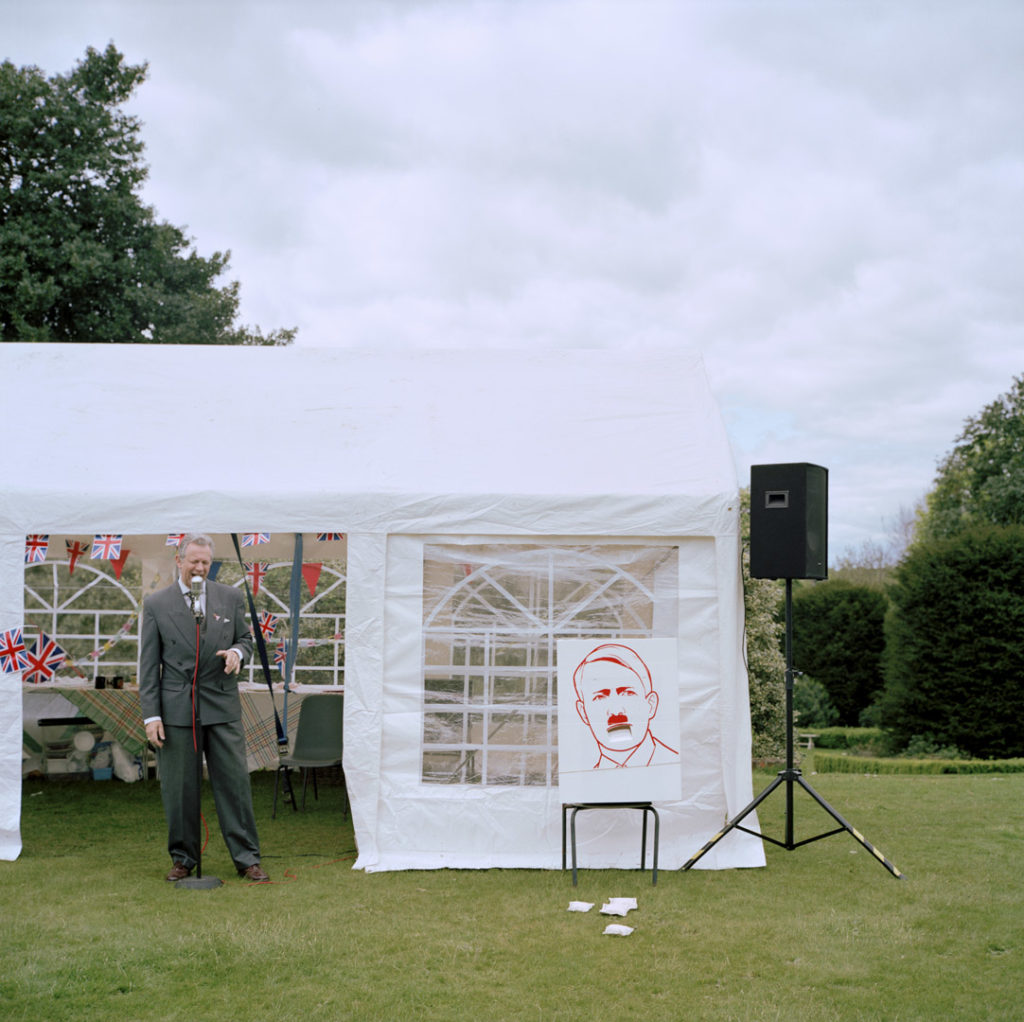 There are differences also in the ways that the war enters formal education: in Western Europe, we don’t know much about what happened on the Eastern front. We think that the end of the war started in Normandy, but the Russians had the largest number of casualties. In Russia the perspective is the opposite: the Americans helped, but the soviet army liberated Europe. There is not one history, everybody paints it the way they like, and in retrospective we can see how the Cold War played a role in that.

"On one hand you can say that I focus on the sites, rather than on the events, but mostly in fact I do look at people" 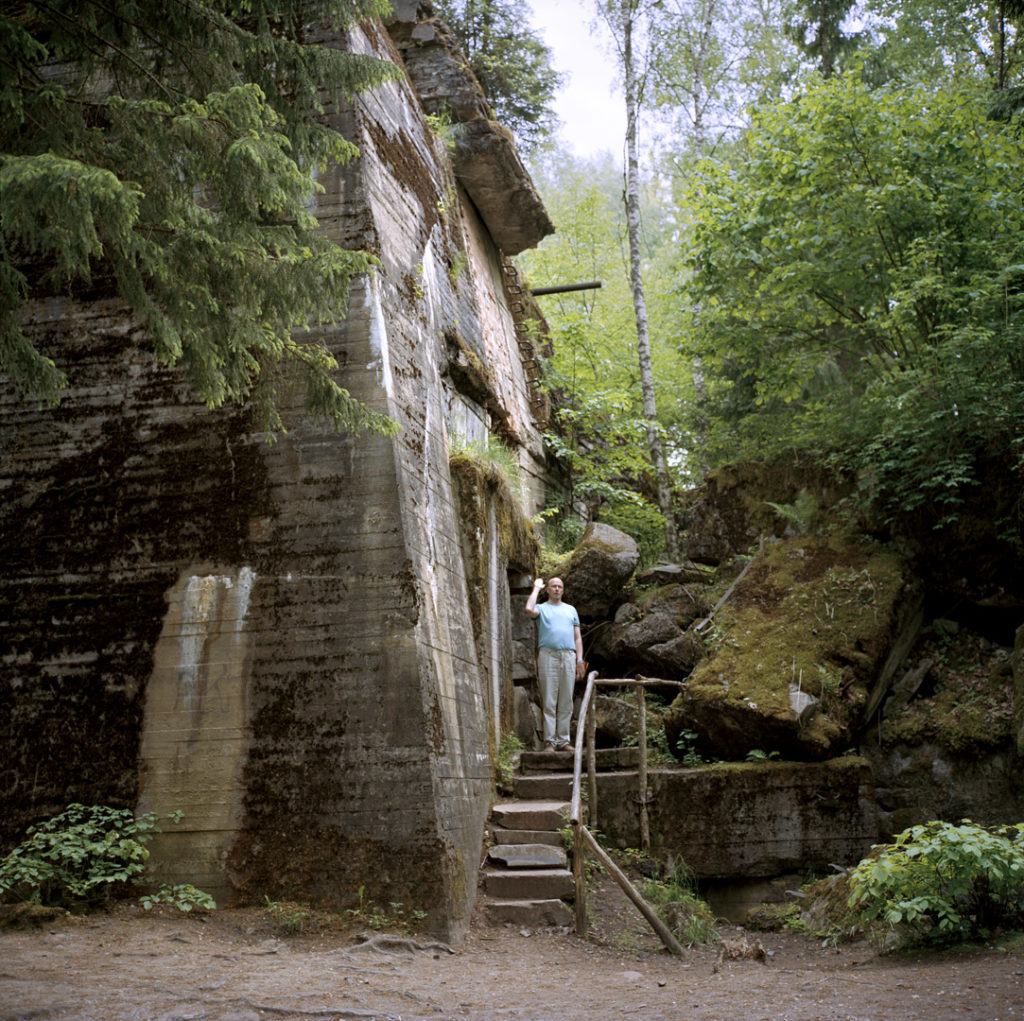 First, a different question: is this project finished? I tried to end it other times, but probably in some years I’ll be here with part two. I am now already planning to go to Poland. I might go to Serbia and also work more in Russia. I would be interested in documenting sites in Northern Europe, like Norway, and possibly Italy. Even Libya, but I can’t work there given the present conditions. 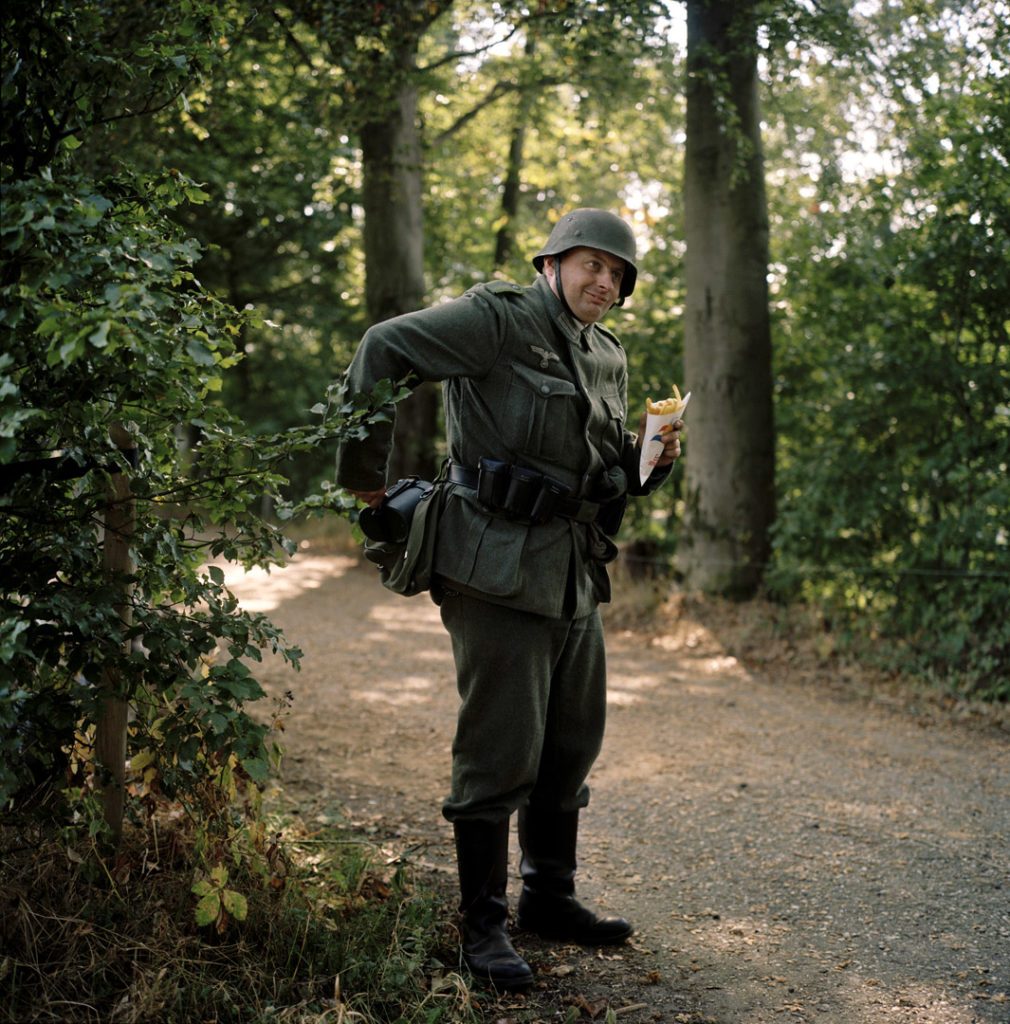 How do you feel your work could help shape a debate about the identity of Europe?

People debate about the way we handle the topic of WWII. Throughout Europe, for example, I am involved in discussions about the fact that we don’t know much about England or Russia. Even with my ironic vision, I believe it is possible to start a discussion and become aware of other Europeans, of the other Europes and of their people. Irony is a figure of speech, a rhetorical device, and with it you can open a door. People at first laugh or chuckle, but then they ask themselves why they are doing that. This question can start a discussion about the role and the materials of history, about the place we live in.

This is part of a series of conversations conducted with relevant figures in search of European narratives, reinforcing or debunking the EU’s myths and identities.