Biking to my first protest in The Netherlands I felt skeptical. Not of the cause (to stand against racism and show solidarity with refugees), but of the number of people who would actually show up to support it. Despite it not being an overwhelmingly large assembly, I felt warmed by the crowd that had gathered and the spirit that accompanied them.

As I arrived at 13:00, a man of almost 90 was speaking on stage. He gave a brief history of the square we were standing on, Jonas Daniël Meijerplein, and the suffering that had taken place close by during WW2. A friend translated parts of the speech in my ear reiterating how the speaker lived through the beating of the Jewish people in that area, before they were taken to concentration camps. It’s in these moments I realise, that you need not understand every language to comprehend the suffering someone has experienced. 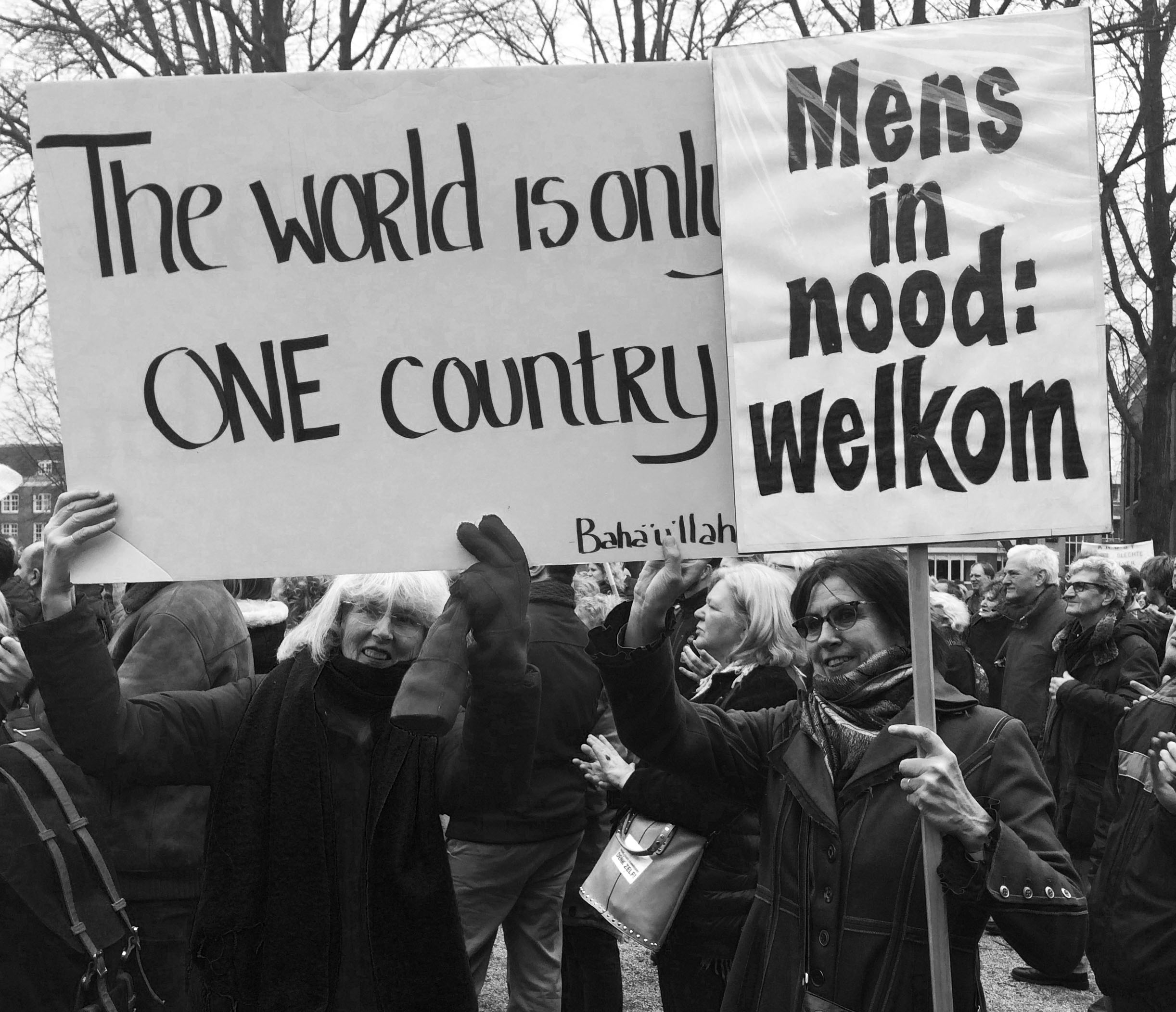 "the overall message was clear “Toen niet, Nu niet, Nooit meer Racisme” (Not then, not now, no racism ever again)."

I looked around and more people were approaching. A good sign, I thought. Eventually we would turn out to be a mass of around 1500 supporters. There were many signs, along side flags of a homemade and professional variety. Some had slogans welcoming refugees, some peace flags, others quoting Bahá’u’lláh, “We are all flowers of one garden”. And occasionally the more ambiguous Spongebob Squarepants pillowcase posing as a flag tied to a poll. No matter what the signs or flags displayed, the overall message was clear “Toen niet, Nu niet, Nooit meer Racisme” (Not then, not now, no racism ever again).

One of my favourite moments was the powerful performance by rapper Insayno. He began by getting the crowd to shout “FUCK PEGIDA”, they happily obliged, and followed with two tracks, I think I understood that the second was a new release, but I could be wrong. He raps in Dutch, so the lyrics went slightly over my head, but the intensity was hard to miss, and that I enjoyed. 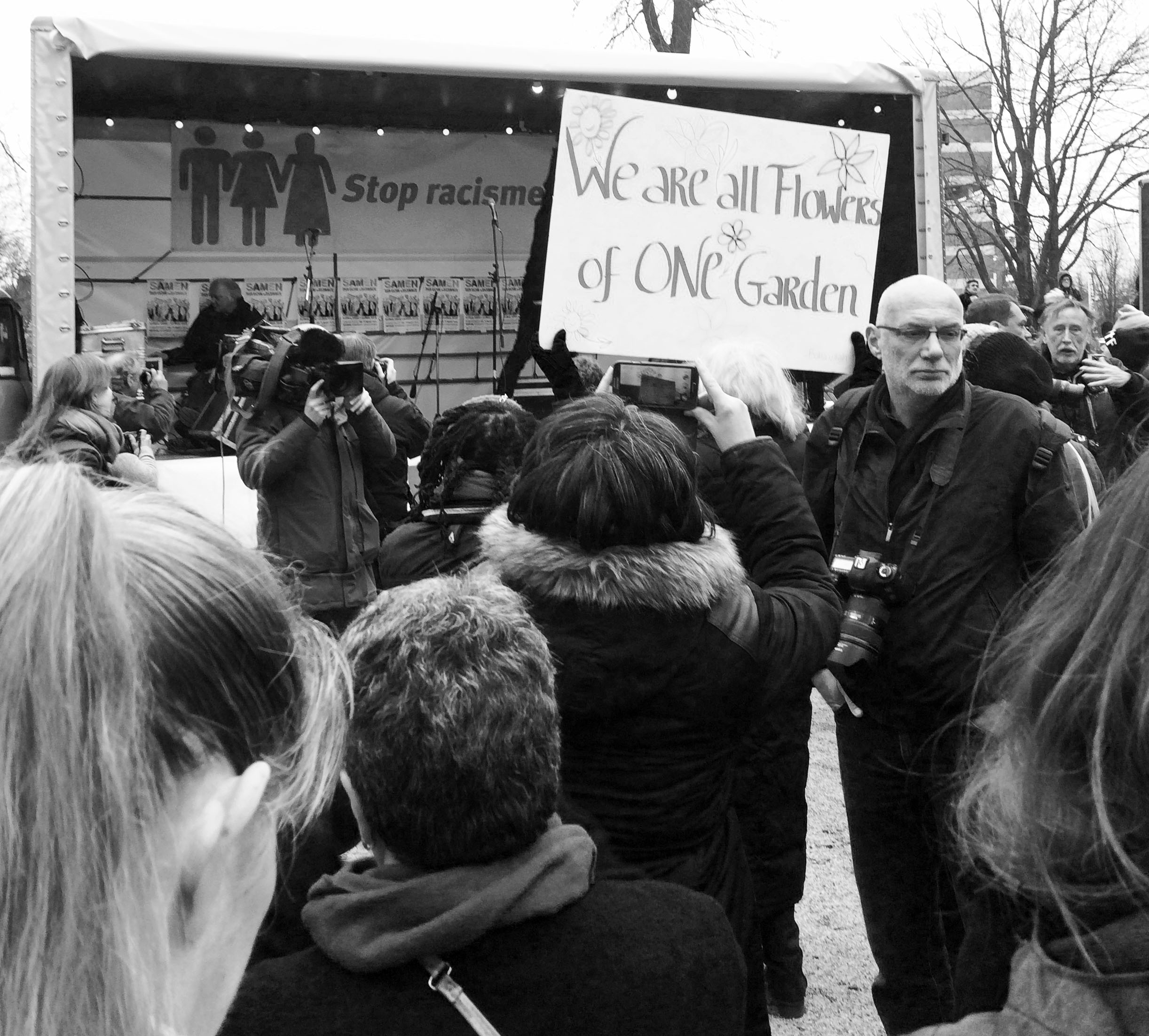 A technical sound problem meant standing near the front of the stage was a bit damaging for the ears, so we moved a few paces back just before a young woman from Somalia took to the stage. She chose to leave Somalia 5 years ago to escape a life nobody should be forced to live. For 5 years she has lived in The Netherlands and yet she has still been refused rights to a house, to work, or to health-care, yet she continues to fight, with many others, to live in a country where she can be free. Her attitude towards her own braveryand self-worth was uplifting, yet left me with a lump in my throat knowing that there are many fighting the same battle, and many more making an already devastating journey, even more intolerable. She ended with 3 important words “We Are Here!”.

Between the well-received speeches and performances, a more controversial speaker was programmed in the agenda. As I arrived, I took a flyer from ‘Feminists Against Racism’, I put it in my bag and thought I’d wait until after to read it. I quickly had to skim through, mid-introduction, to understand what was happening when a representative of the PvdA party came onstage to a mixture of cheers, booing and an anti-PvdA protest in front of the stage. “As governing party in the past years, the PvdA has contributed to demonizing and deporting (un)documented migrants, proposed Plan-Samson to send them back to Turkey where many are not safe and does nothing for people who have been denied asylum, but have nowhere else to go” the flyer reported, followed by the request to “turn our backs on PvdA’s speaker today”. The moderators words that “everyone is welcome” rang true to many ears, however it’s hard not to wonder whether PvdA’s speech was just propaganda to secure more votes, when later they could turn their backs on us.

This demonstration ended, as every peaceful demonstration should, with guitars and singing. As the crowd dispersed and my brain had already started walking home, we heard samba drums coming from a newly formed, smaller, crowd. The drums kept me going for another half hour, the perfect way to end the demonstration, affirming the message of support and solidarity.

The following organisations participated in the event: