At the end of March, New Europeans Charlien and Tessa went to Brussels to attend the literary seminar Need and Necessity organized by the international house of literature Passa Porta. Passa Porta invited six established authors and eleven so-called “New Voices” (upcoming authors) from ten different countries to look into the issue of the need and necessity of literature over the course of four days.

The timing could not have been more strange. We arrived a day after the brutal attacks that took place at the Zaventem airport and the Maelbeek metro station in central Brussels. Wandering around the almost empty streets, it felt like we were tourists that had come only to experience the disaster that had just happened. What made it even more unreal was the timing of the keynote speech, written by the Ukrainian writer and thinker Andrey Kurkov, one of the established authors that participated in the seminar. The day before we arrived, the day of the attacks, he publicized ‘Which Weapon Should The Writer Choose?‘, which discusses the topic of writing in times of terror.

We were invited to attend two days of the New Voices seminar that brought the six upcoming authors Ida Hegazi Høyer, Karen Köhler, Frederik Willem Daem, Wytske Versteeg, Rebekka de Wit and Katja Petrowskaja together. These meetings stayed mainly behind closed doors; Passa Porta gave the authors the opportunity to discuss sensitive subjects without a public event attached to it. But the overall topics discussed touched upon important issues that are of relevance to artists in general. For example about how to deal with expectations and pressure from the outside world and the growing demand to speak in public to make your profession profitable. 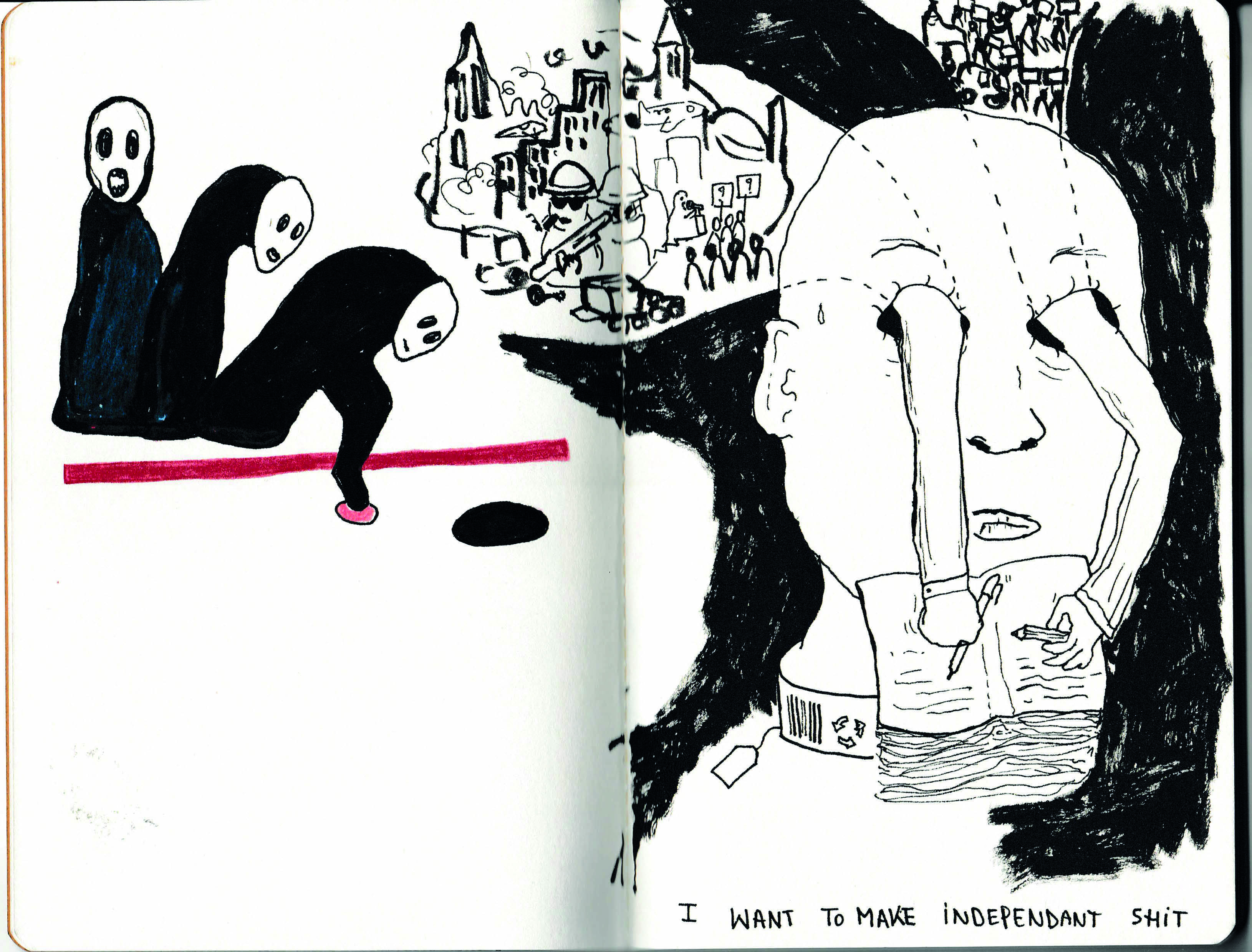 During these sessions Charlien made life drawings, all of which can be viewed on the website of Passa Porta. Tessa was assigned the task of making short radio stories from the questions posed by selected readers for the first five authors listed above.

#1 – Ida Hegazi Høyer
Listen to Ida Hegazi Høyer (b. 1981), a Norwegian writer with Danish and Egyptian roots. Høyer responds to the question of Sophie about her book “Forgive me”, which was published in 2014.
Sophie asked her: “Forgive me” is a phrase never used in the novel. But actually, all persons involved in this ‘family drama’ are guilty of another person’s misery. Is this unavoidable? Is becoming guilty part of the human condition? Or could asking for forgiveness heal one’s guilt?

#2 – Wytske Versteeg
Wytske Versteeg (b. 1983) is a writer and a political expert. Versteeg responds to the question of Guy about her book “Quarantaine”, which was published in 2015. “Quarantaine” tells the story of a cynic who learns at the end of time what it is to be human.
Guy asked her: does humour come more easily when there is a bigger distance towards the subject or character? Or are there no general rules? And above all: is humour – a necessity in real life – also a necessary ingredient in literature?

#3 – Frederik Willem Daem
Frederik Willem Daem (b. 1988) is a Brussels-based author. Daem published a number of stories in the Dutch literary review “Das Magazin”. In 2015 he published his debut collection of stories “Zelfs de volgens vallen”.
Charlien asked him: Your debute contains a big variety of short stories which are situated both in America an Flanders. Do you find yourself, as a (European) (short stories) debutant, in a straddle? With one leg in the American dream, and the other in the so called Flemish clay?

#4 – Rebekka de Wit
Rebekka de Wit (b. 1985), a writer and theatre-maker. De Wit published her debut novel in 2015 ’We komen nog één wonder tekort’, a tragicomic family tale full of insightful meditations on a reconciliation with the imperfection of existence.
Vibeke asked her: In your book ‚We komen nog één wonder tekort’, you describe a kind of development through a journey, a river, a youth and a galaxy: the urge to make good decisions and the longing for a destination. Simultaneously you wish to bring things together in order to be (together) so that a moment can be kept. To which extent did you have to lie in order to create this course and do you think that a writer is able to lie?

#5 – Karen Köhler
Listen to Karen Köhler (b. 1974), who was active for many years as an actress but traded in her career to write plays and prose. The short story collection ‘Wir haben Raketen geangelt’ (2014), her literary debut, won the Schubart-Literaturforderpreis and the 2015 Rauriser Literaturpreis in Germany.
Lietje asked her: All the main characters in your book seem to be strong women who overcome difficult situations. Is that a conscious decision?